Hostility to Religion: The Growing Threat to Religious Liberty in the United States 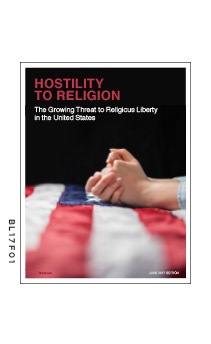 When the first edition of this report was released in July 2014, religious freedom violations across the United States were already significantly high. Since that date, the number of incidents has only increased.The first edition—spanning over a decade—contained 90 incidents. Yet 69 new incidents have been added in the short time since the last report. That is a 76 percent increase in just under three years. Moreover, Sections III and IV, documenting hostility to religious beliefs on natural marriage and human sexuality, contained 42 incidents in the report’s first edition. In the time since then, 48 new incidents have been added to these sections.

Thus, the number of these religious freedom violations more than doubled in a 114 percent surge. While every section of the report shows an increase in the suppression of religious freedom, the changes in Sections III and IV show an even greater increase in the level of hostility to religious beliefs on the topic of sexuality. This trend was apparent in the first edition, and following the Supreme Court ’s decision in Obergefell v. Hodges and other developments, is even clearer now. These numbers are also conservative estimates; some incidents contain more than one person or entity affected by the religious freedom violation, yet we only counted it as one incident. Thus, the actual figures are likely much higher. In a society like ours, we must be the guardians of our own freedom. Anyone who desires freedom in the future must take note of what these trends tell us about our freedom right now—relative to where we have come from—in order to protect freedom going forward.