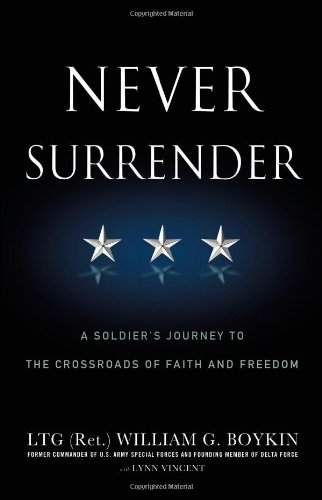 Never Surrender: A Soldier's Journey to the Crossroads of Faith and Freedom
by LTG (Ret.) William G. Boykin

General Jerry Boykin is one of the original members of the Delta Force and has spent the majority of his career in Special Forces. His work in this area of the military placed him in many battles--some of them legendary. He was commander of the Delta Force team portrayed in the movie Black Hawk Down.

These and other dramatic experiences make Boykin's life story read like the riveting fiction of Tom Clancy. He shares how his foundation of faith--while challenged and even broken--was restored and became the lifeblood that brought him through unimaginable circumstances to a rich and inspiring life. In the end, the general realizes his life would have gone very differently, even tragically, without his faith.