How to Respond to the LGBT Movement 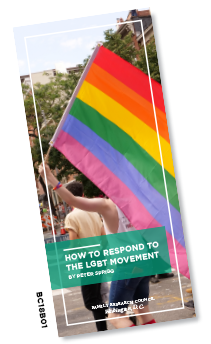 The first wave of this attack came from the modern feminist movement, challenging traditional social roles of men and women. The second wave came from the homosexual movement, challenging the principle that men and women are created to be sexually complementary to one another. The third wave of this assault on the sexes has come from the transgender movement, which has attacked a basic reality—that all people have a biological sex, identifiable at birth and immutable through life, which makes them either male or female.

There are certainly overlaps between the homosexual and transgender movements—both assert a radical personal autonomy even in defiance of the natural characteristics and complementarity of the two sexes. As a result, the two movements have also been allied politically more often than not. For that reason, Family Research Council here offers a response to both.

However, there are also sufficient conceptual differences between the issues of “sexual orientation” and “gender identity” for them to be addressed separately. Here, FRC will recount some of the major claims asserted by these two movements, and explain based on the science and evidence why those claims are inaccurate.

In recent years, activists pushing for a “LGBT rights” political agenda—such as the redefinition of civil marriage to include same-sex couples and the expansion of non-discrimination laws to include sexual orientation and gender identity as protected categories—have become increasingly virulent in their attacks upon social conservatives who resist that agenda. Examples of these attacks include a Colorado public official comparing the exercise of religious conscience by a baker of wedding cakes to slavery and the Holocaust, and the Southern Poverty Law Center’s continual expansion of the list of mainstream pro-family groups that it labels as “Anti-LGBT Hate Groups”—even after the list was used to target Family Research Council for an act of terrorism in 2012.

Such attacks reveal a fundamental misunderstanding (if not deliberate misrepresentation) of the beliefs, arguments, and motives of social conservatives.